Archie Simpson was born in Earlsferry, Fife in 1866 and was one of six golfing brothers, the others being Bob, Jack, David, Charles and Alex.  His first golf club was Earlsferry Thistle and he won the club’s Burgh Medal in 1881 when he was 17.  He had one of the most graceful swings of all the players of his day and was considered to the finest golfer of the distinguished Simpson golfing family, no mean feat.

Archie never won the Open championship however his record for consistency in the competition over a 16 year period  between 1885 and 1900 was second to none.  He was second twice,  at St Andrews in 1885 and at Prestwick in 1890.  The other times during that period he finished no higher than 16th.  Apparently in addition to being a great player Archie liked a gamble and would take on all comers for stakes as high as £100 a small fortune in these days.  He was more often than not successful in winning his bets.  An article written in 2007 by Richard Goodale of the magazine Golf Course Architecture provides a useful source of information on Archie.  In 1887, for example, he thrashed the reigning Open Champion, Willie Park Junior, in a famous 72-hole match home and away (Carnoustie and Musselburgh).  Archie won by 11 holes, winning at both home (Carnoustie, two up) and away (Musselburgh, nine up).

In addition to playing golf Archie was also a clubmaker, teacher and a golf course designer.  On leaving Earlsferry he moved to Carnoustie to join his brother Bob then in 1891 he moved to Bembridge on the Isle of Wight for 6 months before returning to Scotland to Prestwick and then returning to join Bob at Carnoustie again in 1892.  His next move in 1894 was to become the professional at Balgownie (Royal Aberdeen) in Aberdeen.  He was there for 17 years and during that time got heavily involved in golf course architecture.  Both himself , his brother Bob and latterly James Braid all made changes to Balgownie Golf Course.  Archie first worked on golf course design with Old Tom Morris, likely helping in some way with the design of the courses at Dornoch, Nairn, Carnoustie and Cruden Bay.  He was responsible himself for the designs of golf courses at Deeside (Bieldside), Ballater, Aboyne, Stonehaven, Balnagask and Murcar, which was built in 1909.  Murcar Golf Club have an image of Archie playing golf at Murcar Links on their current scorecard and a full-sized print of the image in their clubhouse.  Murcar was ranked 36th in the most recent Golf World rankings for golf courses in Scotland.  Between 27th and 31st July 2021 Murcar will host the Scottish Amateur Championship with both Murcar and Portlethen being used for the two qualifying rounds and then Murcar hosting the match play part of the event.

The next stage in his long career was to move to America to become the head professional at the Country Club of Detroit in 1911 where he stayed for 11 years before then moving back to Carnoustie to work again with his brother Bob.  He was back in America in 1922 and worked at a number of Clubs.  He died in Detroit in 1955 at the ripe old age of 88.

A web link is provided below to Golf Course Architecture’s web site where further information on Archie Simpson can be viewed. 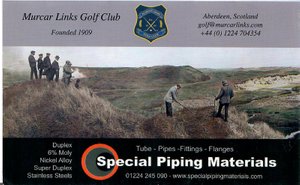 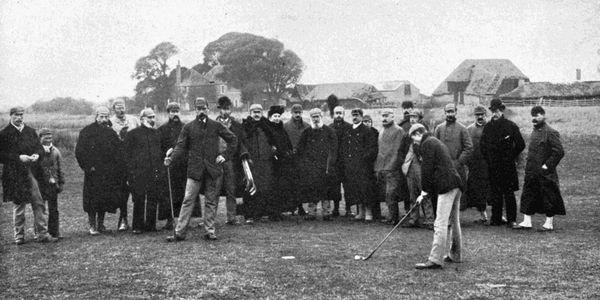