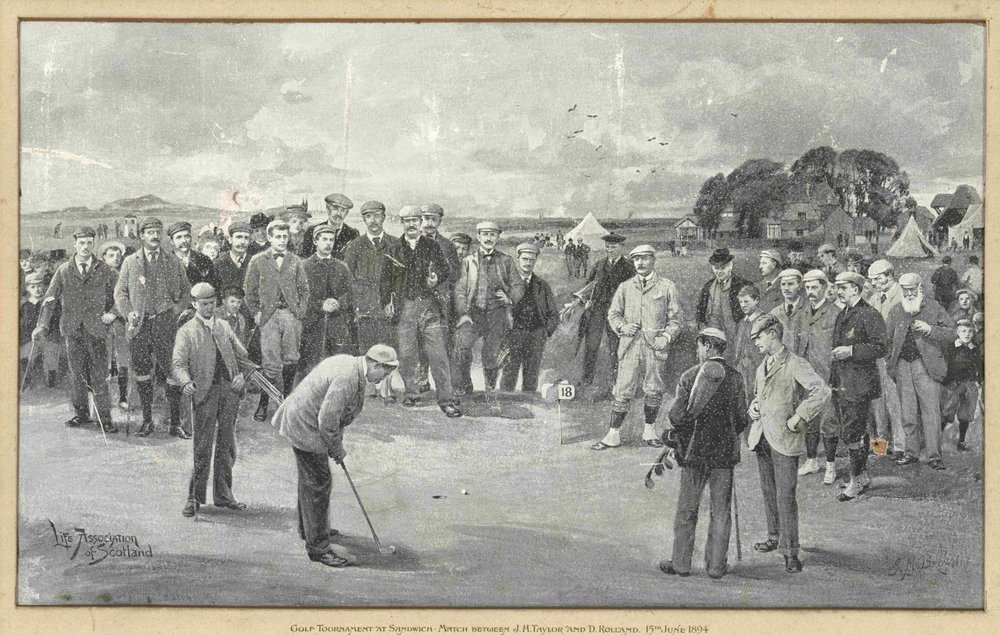 John Erskine Stewart Douglas Rolland was born in Kilconquhar, Fife in 1861 and was a stonemason prior to becoming a golf professional.  He was also a cousin of James Braid.  His first golf club as with the Simpson brothers and James Braid was Earlsferry Thistle.  Douglas Rolland played for the Thistle Golf Club for a number of years and won the Club’s oldest trophy the Burgh Medal five times in 1877, 1888, 1882, 1883 and 1884.  Bernard Darwin’s 1952 biography of James Braid makes several references to Douglas Rolland and golf matches he was involved in.  Darwin describes Rolland as one of the most famous of golf’s uncrowned kings.  In a match in 1884 Rolland and Jack Simpson from the Thistle defeated the scratch pairing of Horace Hutchinson and Leslie Balfour at St Andrews both in morning and afternoon rounds.  Around the same time a challenge was issued from Hoylake Golf Club from the friends of Amateur John Ball (Open Champion in 1890) backing him to play any amateur a home and away match.  The challenge was taken up by Douglas Rolland who won 9 up at Elie and added further to his lead at Hoylake.  Another 36-hole match was played the next day with John Ball being 5 up with 6 to play then losing all of the last 6 holes to lose the match.  There are stories of Rolland arriving to play an exhibition match with no clubs and borrowing a few from his opponent , the local professional, and then thrashing him and setting a course record at the same time.

Apparently on the same day as the second half of his match against John Ball he should have been in Court in Scotland , due to an affair of gallantry.  As he did not attend court, he stayed in England which is one of the reasons why he did not appear in the Open championship again until 1894 when it was played for the first time in England at Royal St George’s, Sandwich.  Rolland finished second twice in the Open, the first time at Prestwick in 1884 and the second time at Sandwich in 1894.  He was the professional at Rye, Malvern, Limpsfield and Bexhill Golf Clubs.  Bernard Darwin regretted that he never had the opportunity to see Rolland play and exclaim after hitting a good shot “Awa she goes, ma bonny bird”.

Douglas Rolland spent four years at Limpsfield Golf Club and at that time was engaged in numerous professional matches playing against many of the great players of the time including Hugh Kirkaldy and J H Taylor.  In June 1894 he took part in the Open Championship, held at Sandwich, in which he finished second, 5 strokes behind J H Taylor.  On the following Thursday and Friday, he competed in a match play tournament arranged by the St George’s Golf Club, between eight amateurs and eight professional players.  Douglas Rolland reached the final in which he defeated J H Taylor by 2 and 1.  A print of that final is shown below and the key that accompanies it highlights the many famous golfers who watched that match. 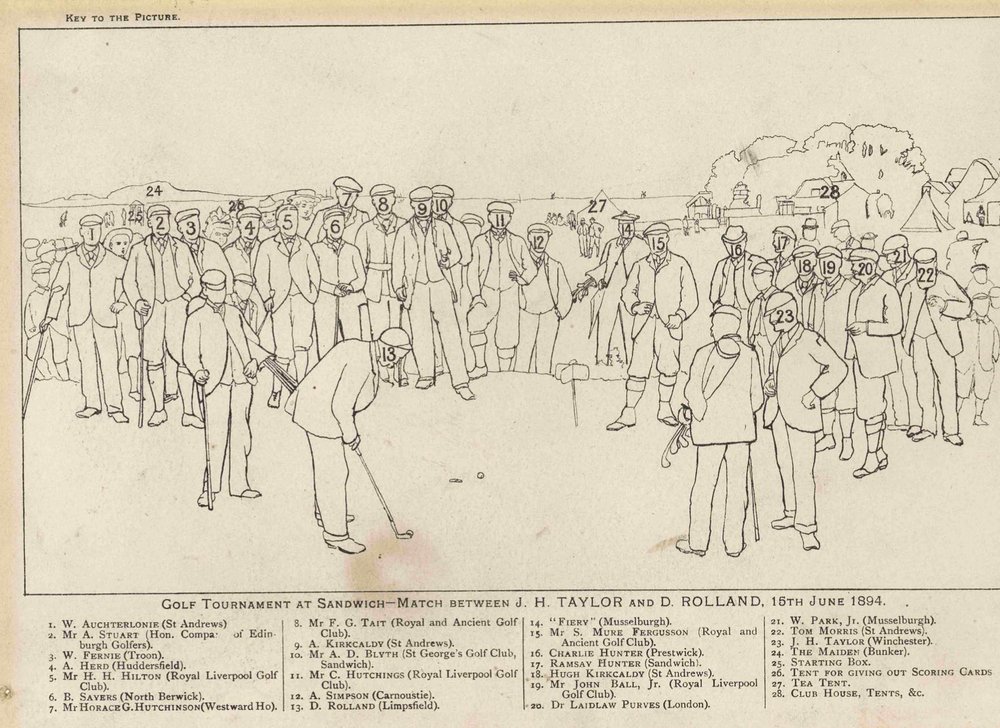 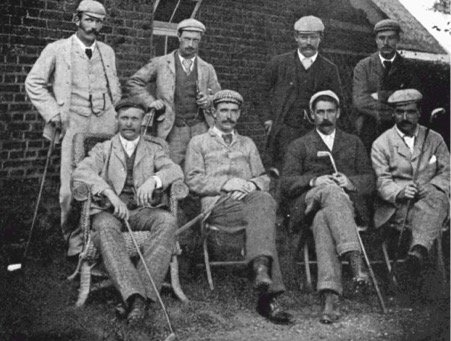 There is an interesting commentary on the beginning of the Amateur Golf Championship which started in 1885 in Horace Hutchinson’s Book “Fifty Years of Golf”.  This involves Douglas Rolland and helped define the status of the amateur golfer.  A quote from the passage in the book is included below.

“Golf had jogged along very comfortably up to this time with its one championship, open to amateurs as to professionals, but never as yet won by an amateur. Then, in the winter of 1884-5 it occurred to some original genius of the Club at Hoylake—"why not a championship to be restricted to the amateurs?" I do not know whose great brain first flashed out the idea, but they wrote and explained it to me, asked me to serve on a Committee for the purpose, and gradually the scheme was licked into something more or less like shape. It was decided to hold, under the auspices of the Royal Liverpool Club, a tournament, under match play rules, open to all amateurs. The Club gave a handsome prize, or, rather, two prizes. I went up to Hoylake a little while before the affair came off, and there found the Committee in charge in something of a difficulty. Douglas Rolland had sent in his entry and they did not know how to deal with it. You see, at that date we had no definition of a professional, nor of an amateur, and had to decide on the analogy of other sports. I was all for accepting Rolland's entry then, and I am of the same opinion now—that it ought to have been received.

His offence was that, having come in second to Jack Simpson in the previous year for the open championship, he had accepted the second prize money, thereby violating the law common to several sports and pastimes forbidding an amateur to receive a money prize when in competition with professionals. That would have been all plain sailing but for the unfortunate fact that it was discovered that Johnny Ball, some years before, and while still quite a boy, had played himself into the prize list at an open championship and had been offered, and without a thought about the matter had accepted, a sum that I think amounted to no less than ten shillings. It was, of course, unthinkable that Johnny should be deprived of his birthright as an amateur for such a boyish error as this. There never was the faintest suspicion of professionalism about any act of Johnny Ball's extraordinary golfing life, but technically, at that date, his case and Rolland's were very much on all fours. I saw that the Committee, or a majority of them, were resolved to reject Rolland's entry. I did not care to be a member of a Committee which rejected, for a cause I could not quite approve, the entry of one who would certainly be a very formidable competitor for a tournament which I had a distant hope that I might possibly win. I therefore asked leave to resign from the Committee, before the vote was taken on the point, and did so, with perfectly amiable sentiments all round. I have been rather long-winded perhaps in this explanation, but I wanted to make clear to those who are not informed about it the reason why the present amateur definition is drafted just as it is, with a time limit beyond which—that is to say before sixteen years of age—a man shall be held guiltless of having done any action to spoil his amateur status in playing for a money prize in competition with professionals.

So that was settled, and Rolland's entry disallowed. It passed off with less trouble than I had expected, perhaps just because Rolland was such a thoroughly good fellow, whether he were professional or amateur, and not at all of that small spirit which is apt to take offence where none is meant.”