James Braid was born on February 6th 1870 in a cottage in Liberty Place, Elie a few yards from the boundary between Elie and Earlsferry, which were amalgamated into a joint burgh in 1929.  His father was also called James, and from the parish of Elie in Fife. His mother was Mary, from neighbouring Kilconquhar.  His father was a ploughman and herdsman and one of the few men in Elie and Earlsferry who did not play golf at that time.

James’s first golf club was Earslferry Thistle at Elie, which he joined when he was 15.  Braid refers to his time at Earlsferry and Elie, stating that all about there it is all golf and everybody must play unless he wishes to be taken for a crank, or as somebody with whom there is something constitutionally or mentally wrong. He modestly stated that he was the same as any of the other boys at Earlsferry, although a little more precocious on golfing matters. From the age of five or six he regales that he was never to be seen outside his parent’s house without a club in his hand.  James had the good fortune to play with and learn from the many other golfing greats who were members of the Thistle at that time.  These included James cousin, Douglas Rolland and the Simpson Brothers of whom, Jack Simpson (Open Champion in 1884), Archie Simpson and Bob Simpson were the most notable.

Braid spent time as a schoolboy caddying. His first annual caddie competition was at the age of eight. He played three times over the smaller three hole course, winning the junior class by 20 strokes.  Jamie Anderson, in his career a three times Open Champion took notice of Braid from the age of nine.  This was when Braid first saw Anderson compete in a professional versus amateurs match at Elie.  When the match was over Anderson asked James to play a shot or two and then told him to play as much golf as possible and practice hard and he would one day be Open Champion.  In 1885 he attained what stood for a long time a record score of 40 over Earslferry’s 11 hole course.  He became a scratch player at the age of 16.  In 1888 he is identified in John Bauchope’s Golfing Annual of 1888-89 as having won the Thistle Club’s Burgh Medal, a scratch competition, also won by Archie Simpson and Douglas Rolland.

Braid began his working life as a joiner at St Andrews, something of which he maintained an interest in, throughout his career.  James then made a move in 1891 to Edinburgh, where he enjoyed plenty of golf on the Braid Hills Course, as a member of Edinburgh Thistle Golf Club. At this time his handicap was Plus 2 or Plus 3.  He played for the club in the Dispatch and Glasgow Evening Times trophy, the latter of which was competed for at St Andrews.  Whilst at the Edinburgh Thistle Club he won the Braid Hills Tournament defeating a field of 140 players from all the Edinburgh Clubs with a course record.  In recognition of their shared history of James Braid, Earlsferry Thistle and Edinburgh Thistle Golf Clubs have played team matches against each other since 2010 for the Thistle Quaich Cup.

James Braid then moved to become the professional at Walton Heath in 1904 when the course there became ready for play.  He remained there until his death in 1950.  By this time James had won the Open Championship at Muirfield in 1901 with a score of 309, 3 shots better than Harry Vardon in second place and 4 better than J H Taylor in third place.  These three great players were to become known as the Great Triumvirate and dominated the Open Championship and competitive golf in general in the 20 year period before the start of the First World War.

James Braid’s first Open was at Sandwich in 1894 when he finished tied 10th.  He came close at Hoylake in 1897 finishing second, one stroke behind Harold Hilton.  He finished 3rd in 1900 at  St Andrews before winning the next year at Muirfield.  His other Open victories were at:

James Braid also finished tied second at the Open in 1902 at Hoylake and tied second in 1909 at Royal Cinque Ports in Kent.  Between 1894 and 1912, Braid only missed one Open and never finished worse than 10th.  He was the first golfer to win 5 Opens a feat equalled by J H Taylor, Peter Thomson and Tom Watson and only bettered by Harry Vardon with 6 Open victories.

James spent 46 years as the professional at Walton Heath one of the most highly regarded golf courses and golf clubs in the United Kingdom.  During James’s time there it hosted the English Amateur Championship and the News of the World Matchplay Championship.  More recently it has hosted the European Open, the Ryder Cup and most recently the British Masters in 2018.  It’s membership has included Lord Riddell a founding member and owner of the News of the World, four Prime Ministers including A J Balfour, Llyod George, Bonar Law and Winston Churchill and, two time British Amateur Champion Sir Ernest Holderness who also played in the same Walker Cup Team of 1930 as Thistle member James Nelson Smith.  Bernard Darwin’s biography of James Braid makes reference to James playing foursomes with Winston Churchill and being influential in coaching  Sir Ernest Holderness.  Darwin was a member of Walton Heath as was golf writer and twice British Amateur Champion, Horace Hutchinson.  James named the house he lived in at Walton Heath, Earlsferry in recognition of where he grew up.  James’s son Harry Muirfield Braid an OBE was captain of Walton Heath in 1953-55 and a fine amateur golfer.  He also became a member of Elie Golf House Club and was a winner of the Elie Links Championship in 1952.

As well as one of the game’s great players, James Braid will be remembered for his major contribution to golf course design having designed, remodelled or added to circa 400 golf courses across the British Isles and one in the United States.   As he suffered from travel sickness and had a fear of flying he used rail travel in the main to reach the destinations for his commissions.  Probably the most famous courses associated with him are the Kings and Queens Courses at Gleneagles and the 13th Hole “Braid’s Brawest” on the Kings Course is named after him.  Apparently James Braid often signed his name to the hole he considered the best when he designed a course (a Signature Hole).  There is a Braid’s Best at Forfar (the 15th) and a Braid’s Brawest at Dalmahoy East (the 16th).  All Braid courses are well worth playing and in Scotland they include to name but a few, Carnoustie, Rosemount at Blairgowrie, Boat of Garten, Brora, Lundin Links and Buchanan Castle.  There are also many great Braid courses in England and Wales and Ireland.   Braid published his book Advanced Golf in 1902.  Two chapters of the book are dedicated to golf course design – The Planning of the Course, and The Character and Placing of Teeing Grounds, Bunkers and Putting Greens – these make for interesting and informative reading.  Braid’s philosophy in designing courses sought to create risk and reward for holes.  He also favoured the use of doglegs, extensive bunkering, Par 3 holes aligned in different directions and smaller greens for Par 3 Holes.  Many golf clubs with a James Braid course are members of the Association of James Braid Courses and club members can play other James Braid courses at preferential rates.  There is also a James Braid Golfing Society which Australian golfer and 5 times Open Champion, Peter Thomson was instrumental in setting up.  Membership is by invitation only.

If James Braid had been of current times he surely would have been knighted for his achievements and services to golf.  Together with J H Taylor he was a founding member of the Professional Golfer’s Association in 1901 and was elected the PGA’s first captain.  James Braid was made an Honorary Member of the Royal and Ancient Golf Club, St Andrews in 1950 and commemorated in the World Golf Hall of Fame, Pinehurst, USA in 1976.  James Braid died at the age of 80 on 27 November 1950.  A plaque was placed on the front of Earlsferry Town Hall on 1 June 1951 commemorating his legacy.  The Thistle Golf Club renamed a trophy for their scratch Open competition the James Braid Memorial Trophy in 1961 in memory of their greatest player and this is still played for at the club every year.  His legacy lives on through his golf courses. 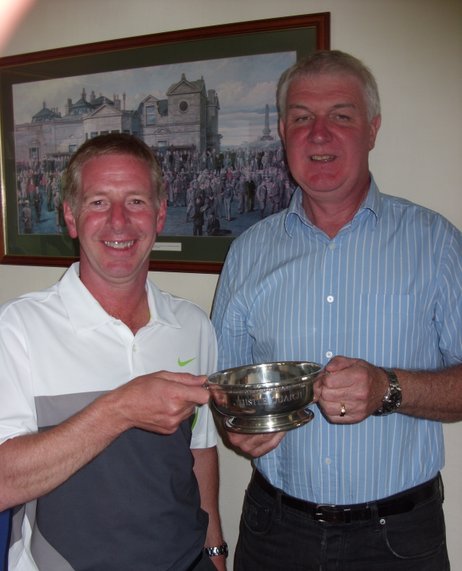 James Braid turned professional in the autumn of 1893, thanks to a chance encounter on Princes Street, Edinburgh with his long time friend Charles Smith.  As winter approached Braid left his employment in Edinburgh, and headed south with Smith.  Braid began work as a golf club maker for Army and Navy Stores in London.  At the time his new job was viewed as little more than a superior caddie.  Neither his father, who never played the game, nor mother approved.  James however quickly became proficient as a club maker and worked at the Stores from 1893 to 1895.

James played his first professional golf match at a 9 hole course at Limpsfield, where his cousin and former Thistle club mate, Douglas Rolland was the professional.  Braid first came to wider public attention in December 1895 when halving a 36 hole match with JH Taylor (who had already won two of his five Open Championships by then), at West Drayton.  Both played a brilliant game.  In Taylor’s speech after the match he stated that he honestly believed he had never played a better game in his life than he had against Braid.  He also acknowledged that the form shown by his opponent that day had been a revelation.

In 1896 Braid was appointed head professional at Romford Golf Club in Essex, where he stayed for 8 years.  He is credited with having designed/re-designed the course, one of his first forays into Golf Course Architecture.  Such is the quality of the course, Romford has hosted the regional qualifying for the Open Championship on 6 occasions.  James’s first professional victory in strokeplay came in an open tournament at his home club in Romford in October of 1896. He was victorious against a strong field, including eventual six times Open Champion Harry Vardon, Jack White, J H Taylor, Ben Sayers and Sandy Herd.  Braid was noted for the length and carry of his tee shots. Playing his cleek in the wind was also a strength of his. Putting perhaps less so. 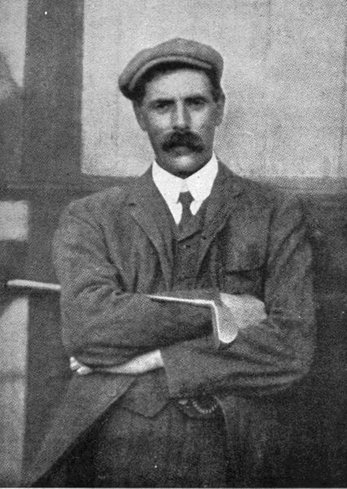 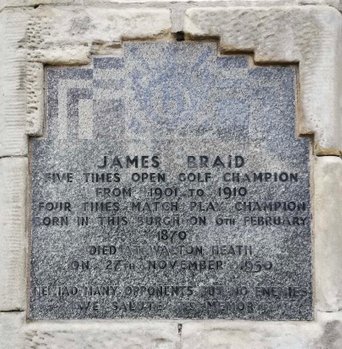 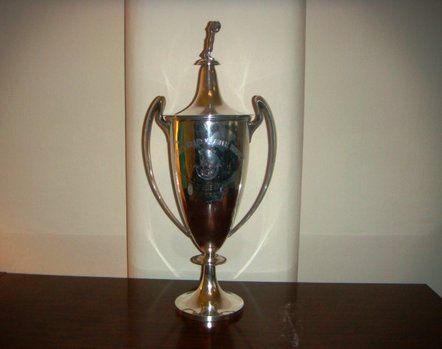 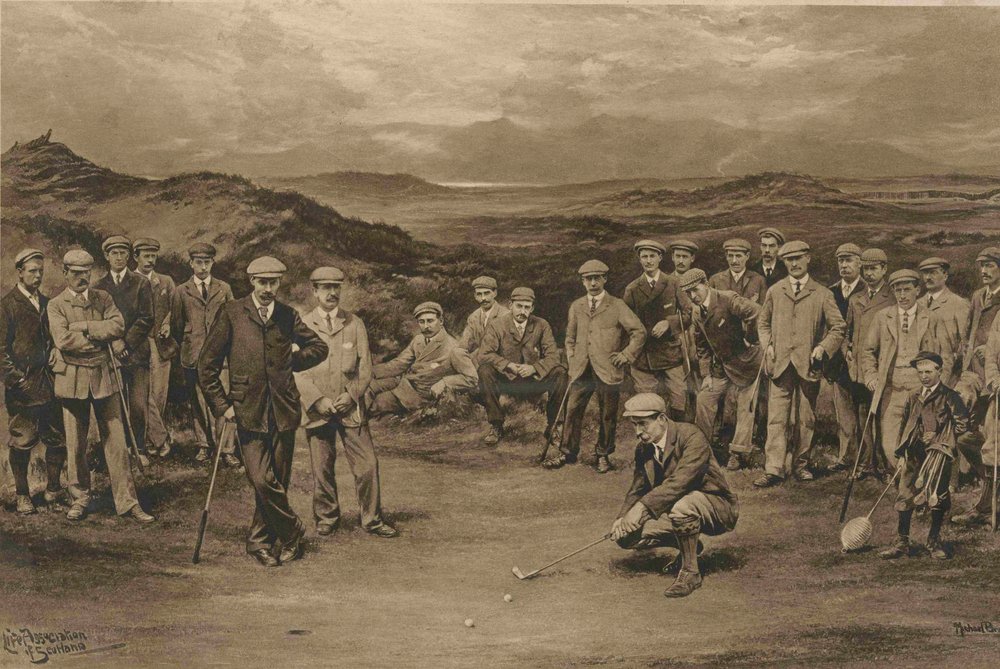 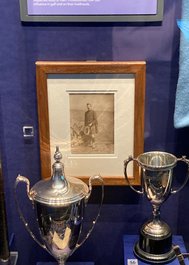 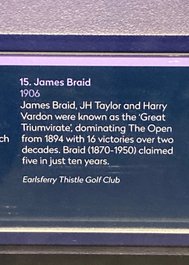 Check out the new book about James Braid by George Payne who is married to the great grand-grandaughter of James Braid and who had access to Braid's Ledger Book.  The book is titled "Divine Fury of James Braid" and was published in three volumes in late 2021. A link is provided to where the book can be purchased. 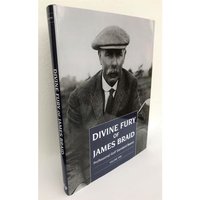 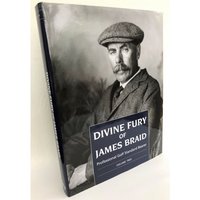 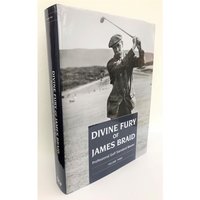